Poverty might snatch away the fulfilment of basic needs but some people have burning desires with flames so high, that nothing can stop them from achieving what they deserve.  Parmod Kumar and Suraj Kumar from Hallomajra were also victims of poverty until they decided to reform their lives with the help of sports. Sports doesn’t differentiate between rich and poor. It holds equal opportunity for all.

They started training in taekwondo under 41-year-old Amrita Marwah from Panchkula, who herself is a Taekwondo champion. She established a summer camp in 2011 with the name Amita Marwah Activity Society. They trained under her supervision every day in Hallomajra.  All of the services were for free but just training was not enough alone to take over world-class competitors. They had to maintain a proper diet. Since they were in high school and that too from a poor financial background, they worked part-time as waiters to support their families and maintain their diet.

“The training is free of cost, but to match competitors from other countries we need stamina for which a proper diet is a must. Whatever I earn as a waiter, I spend on the diet,” said Suraj.

After months of rigorous and dedicated training, they participated in the 3rd Heroes Taekwondo International Championship and Para-Taekwondo 2017 which organised by Thonburi University. They competed against participants from 10 countries including Hong Kong, China, Uzbekistan, Iran, Indonesia, Singapore, Philippines, Malaysia, Laos, Pakistan, Nepal, Bangladesh, Ethiopia and Qatar.

It's not just them who were benefitted by the selfless approach of Amrita but there are 450 others too, with 50 girls among them. It’s a divine job of a lady to help such underprivileged kids to get to the right platform. The girls also learn the art of self-defence here which in return make them independent and resilient to many threats in the society.

“Parents do not support girls to come forward and learn this sport. But we are working to convince them to empower them and send their girls for self-defense training; it is the need of the hour,” says Ashish, a disciple of Amrita. 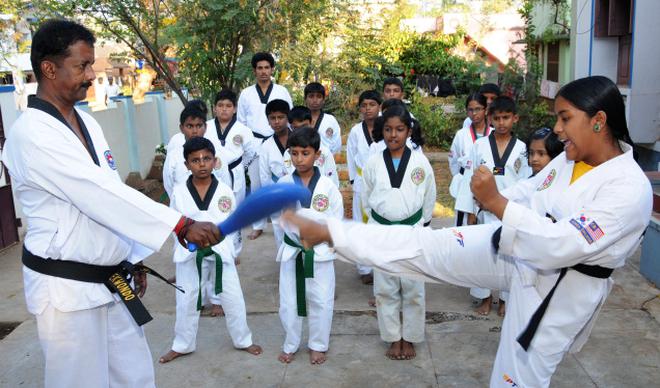 Till now, 18 disciples of Amrita have made it to national and international events. They are the pride of our nation. Such efforts at truly remarkable and should be known to everyone. This will inspire a lot of youngsters who are underprivileged and seek a respectable position in the society. Hard work, sheer will and true dedication are the only ingredients that bring out the best in a person, with little guidance from bright souls like Amrita.